This post is about trying to fully understand the vulnerability behind WanaCry(pt).

The exploit methodology in this post is based on two different exploit code. One is the Metasploit plugin [1] and the other one is by a Github user @worawit [2]. Worawit’s code is very well documented and therefore it is going to be the primary source where we are going to begin. It gives us great hints about where to start this research.

Before Microsoft patching it, SMB version 1 was vulnerable to a buffer overflow attack. The vulnerability is exploitable when a malformed Trans2 request is sent to the server which enables the attacker to overwrite another part of the memory. The goal of the attacker (and how NSA did it) would be to overwrite some useful memory portion and in this attack it is the buffer of another SMB connection which enables arbitrary write and execution of shellcode in the memory address of the Hardware abstraction layer (HAL). [1][3]. In all Windows versions before the Windows 10, the HAL is in a fixed memory address and is used during boot, therefore making it a nice target for the shellcode.

The exploit is happening in non-paged pool memory which the SMB server allocates for the large requests sent to it. This is quite important information as we will soon see.

From the Metasploit and Worawits exploit, we can see that the primary exploit method works by creating multiple SMB connections which makes the server reserve lots of space for the connections. This helps with aligning the data so that the malicious packet is in a correct position to overflow to the next SMB connection. This process where filling up the heap so that the malicious content would go to a advantageous position is called heap grooming.

I launched a Windows 7 SP1 virtual machine for testing this exploit. This is useful because it is easy to take a memory dump of the whole machine. After setting up my environment I took a memorydump in the middle of the exploit.

Volatility includes a plugin called bigpagepools which we will be using here since we know the exploit is happening in big pools. We would like to look for the buffers that the server reserves in the memory in order to better understand how the grooming process works. By trial and error I found that the buffer has a tag LSbf and I am using it to filter the results in volatility.

I verified wheter these are in fact the right pages by running the same command with the other memory dumps and the results are consistent with the code. For example, here is the results for memory dump number 1.

As you can see, the first big buffer is the only one allocated as it should be.

I wrote a small Python program that uses the Volatility framework to visualize the memory segments. You can find the full code in my github here. The code generates following pictures (click to open the original file):

Figure 1: Before the exploit (step 3)

In both figures a single vertical line represents the memory contents of a single buffer that is allocated by the SMB server for an incoming connection. The lines are in order by their virtual address, but the figure does not show the appropriate space between the buffers (see figure 3). One pixel in the figures represents three bytes of memory content converted to RGB hexadecimal value.

If you look closely, you can see the first line is a bit different from the others. That is the smaller initial packet sent at step 1 and it apparently has a different kind of structure.

I also extended the Python script to visualize the buffers and where they are in the memory. The following figure pictures the state of the memory during different parts in the exploit. This time, the content is not part of the visualization. The colors are hashes of the starting addresses of the buffers which helps with distinguishing different buffers and their locations.

Figure 3: Buffers visualized in the addresspace. After first grooming (left), after the second grooming (middle), after the exploit has finished (right) 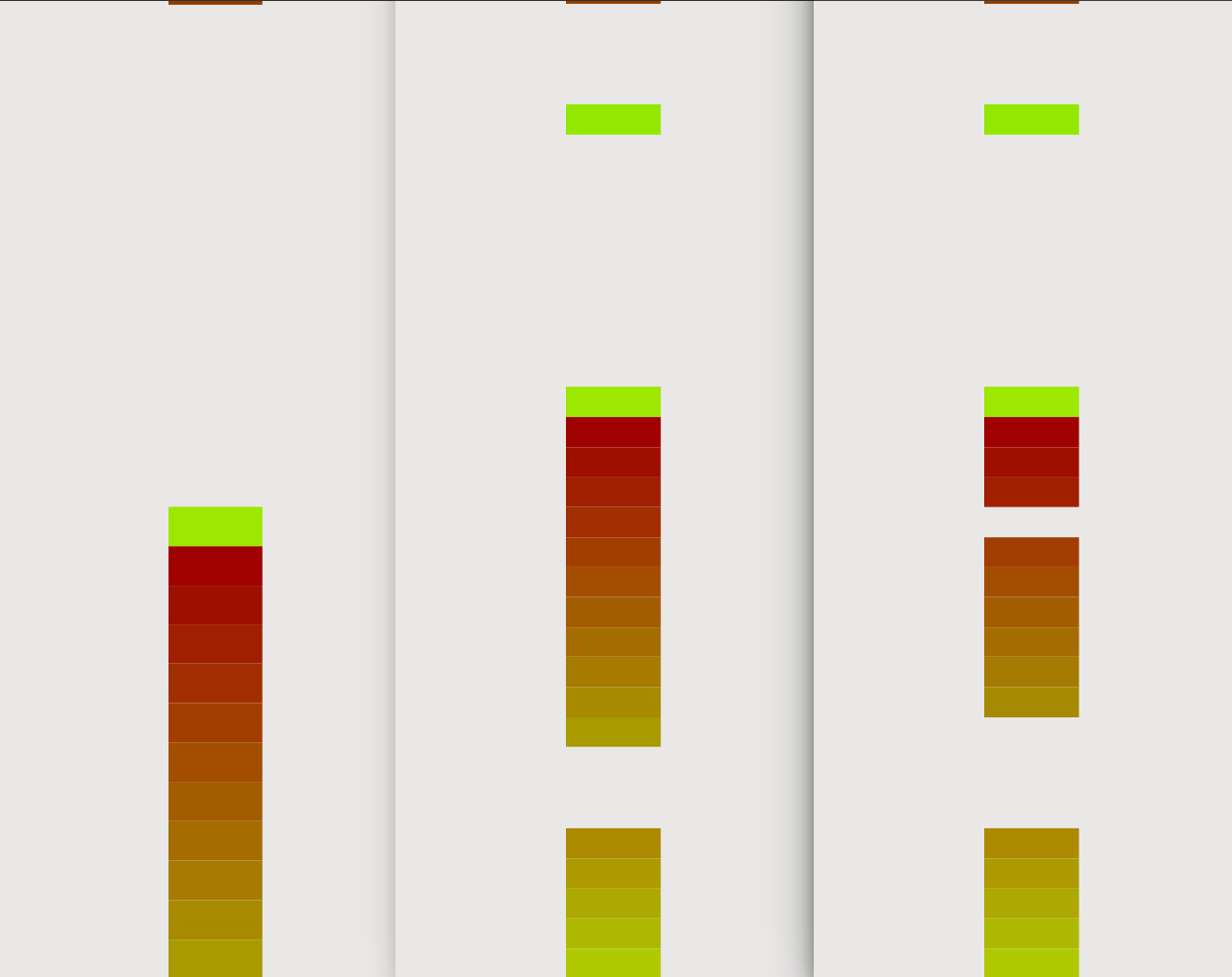 SMB buffers contain a struct header which contain some pointers and details about the connection. This is the part that the exploit eventually overwrites and enables the whole exploit. The data that is overflown contains a fake struct for a SMB connection that is overwritten by the overflow. I will go into more details about the struct and the overflow in part 2, but right now, what you need to know is that there exists a header in the buffer before the actual content. The header is clearly visible in figure 1 since the beginning of the buffers have a similar content and therefore colors.